Consumer Price Index (CPI) inflation in the UK has hit a near ten-year high of 4.2% (year-on-year), beating market expectations of a rise of 3.9% and even beating the highest rise forecast in the Bloomberg poll (4.1%). The rise was, in part, expected due to Ofgem raising its price cap, but core inflation (excluding food and energy) also rose more than forecast, hitting 3.4%.

The inflation report followed a robust labour-market report which saw the UK unemployment rate fall to 4.3% in September. Meanwhile, data for October, which accounts for the end of the furlough scheme, showed a further increase in PAYE employees and another record number of unfilled vacancies. This suggests the labour market remains buoyant despite the withdrawal of government support.

Finally for the UK, both retail sales and consumer confidence surprised to the upside, adding to pressure on the Bank of England (BoE) to raise rates.

Lessons have perhaps been learned from November’s non-event at the BoE. Markets haven’t fully priced in a 0.15% base rate rise at the next meeting of the Monetary Policy Committee (MPC) on 16th December: BoE chief economist Huw Pill has stressed that decisions are likely to remain ‘finely balanced’ and that there is ‘no quick fix’. This week, a number of BoE speakers, including governor Andrew Bailey on Thursday and Mr Pill on Friday, will take the opportunity to clarify their positions on interest rates and present a clearer picture of what to expect at the December meeting. External MPC members Jonathan Haskel and Silvana Tenreyro – both perceived to be at the dovish end of the spectrum – will also speak this week. 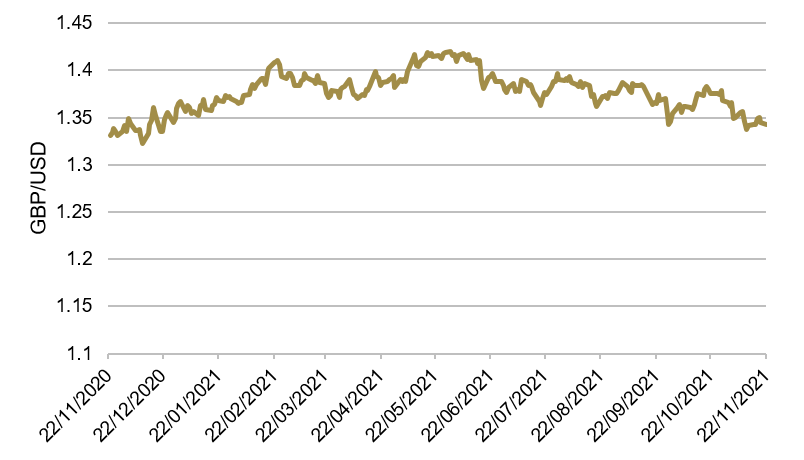 Comments from the BoE aside, Tuesday’s preliminary Purchasing Managers Index (PMI) readings will be of most interest to sterling traders. While these may be a little softer than last month’s robust readings, they are expected to remain in expansionary territory.

The euro remains weighed down by rising coronavirus case numbers and the reintroduction of lockdown measures, as seen in Austria and the Netherlands. Despite inflation rising above 4%, the European Central Bank (ECB) has also been more dovish on the prospect of interest rate hikes next year than other central banks.

There are several data points of interest coming out of the US this week: PMI readings are due on Tuesday, while Wednesday sees the release of Gross Domestic Product and Personal Consumption Expenditure (PCE) Deflator figures, as well as the minutes from the Federal Reserve’s November meeting.

The PCE Deflator – the Fed’s preferred measure of inflation – is expected to track CPI data higher, forecasting a rise above 5% for the first time since 1990. The minutes will be scrutinised to see if, and to what degree, the Fed still views inflation as ‘transitory’.

Markets will be expecting a quieter end to the week, as the US closes for the Thanksgiving holiday on Thursday and part of Friday.

Signalling the impact of inflation on US households, the American Farm Bureau Federation's 36th annual Thanksgiving-dinner cost survey showed the average holiday meal costing 14% more than in 2020. Turkeys may not vote for Christmas, but they will be encouraged by these numbers.